Why some animals eat their babies?

Why rabbits bury their babies?

Why some animals eat poop?

You’ll also learn about some strange behaviors about cats and dogs and the meaning behind them.

Believe it or not, the intentional killing of offspring is practiced by many species. But with rabbits, the reality is a little different. Rabbit do bury their offspring, but they do it to protect them.

Mother rabbits don’t want to attract predators to their babies, so they mostly leave them on their own, hidden and camouflaged.

Interestingly enough, if one of the baby rabbits dies, the mother may eat it. This isn’t because rabbits suddenly become carnivorous. It’s just that a dead rabbit will quickly begin to stink. So the mother will try to do everything possible to eliminate the sources of attention to the burrow.

Despite all these protections, most bunnies end up dead by their first birthday.

Let’s now look at this article where a mother stork throws her baby out of the nest. This is a very normal behavior in storks and many other families of birds.

When a stork parent realizes that she just doesn’t have enough food for all her babies, she gets rid of one or two. More often than not, they throw away the weakest baby and keep the strongest one.

If a mother bear gives birth to three cubs, two of which are unhealthy or too weak, then it’s highly likely that she will kill and eat the weaker cubs. Not only does this provide the mother with energy in the form of increased calories, but she also has fewer children who need better care and care.

Hamsters, on the other hand, eat their babies for crowd control. Research has shown that mother hamsters with nine pups will eat two cubs on average.

When scientists have tried adding two more cubs to the litter, the mother ate four of the cubs instead.

Even lions aren’t an exception. When a male lion in a pride changes, the new leader kills the cubs of his predecessor.

It has been very well reported in the wild that male lions have no interest in raising another lion’s offspring, and they do not want to spend energy and resources to ensure that other lions’ genes will be passed on. So, they prefer killing the cubs or taking them out of the pride.

Interestingly enough, pandas rarely reproduce, but when they do, they often give birth to twins. And then, the mother panda abandons one of her babies.

But people have found a solution. When a mother panda gives birth to twins in captivity, keepers remove one of the cubs, tricking the mother into thinking she only has one cub. The twins are then switched up to ten times a day to maintain the single baby panda illusion.

Cats, for example, can transform from cuddly animals to weird creatures in a second. Have you noticed that they suddenly open their mouth and look around, confused? What’s that? Are they in some sort of shock? Turns out, it is a biological reaction known as Flehmen response. It’s a way of smelling and tasting the air. Cats have special odor receptors in the roof of their mouths. They keep their mouth open to get a better sense of certain smells. Many other mammals, including lions and horses, perform this action too.

We humans haven’t learned to understand the language of animals. That’s why their behaviors generate many questions. Dogs or rabbits, for example, may eat their own feces. But there are logical reasons for their poop-eating behavior.

Dogs want clean spaces to play and live as much as you do and their most obvious way to rid the environment of waste is by eating it.

When a mom gave birth to her puppy, they didn’t know anything about using the toilet, so a mom ate her puppy’s poop to keep her new home clean.

This is the way nature keeps puppies away from the disease, and it is also the way the mother protects puppies. Eating poop is also a way to get important nutrients.

While we may view poop as dangerous, it’s not as scary as we think. While eating poop from sick animals can be an issue as it can contain viruses, parasites, and bacteria, healthy poop often contains harmless bacteria, water, dead cells, and some undigested food. Poop can be nutritious and help reset the gut bacteria to healthy levels.

You probably have noticed that dogs kick back their feet after pooping.

You may think the dog is trying to cover up its urine and feces, but it isn’t. By scratching the ground, the dog is releasing the pheromones in its feet’ scent glands. This is the main way a dog marks its territory. The dog wants the other dogs to know that this is his area.

And while you think that a dog might be sniffing another dog’s poop, they are actually sniffing the pheromones another dog has left behind from kicking the dirt.

How to teach your dog the Speak command, 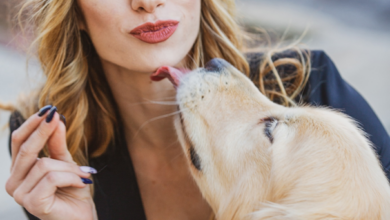 How to Teach Your dog not to Lick